And then Tremonto created…light! This could be the trademark of renowned lighting artist and designer Marcus Tremonto that can´t stop surprising us with his imaginative ideas. This time he had the inspiration to create a limited edition collection of the legendary munny and dunny toys called Lightbotz for Kidrobot. A devoted collector himself and a pop culture addict, Tremonto took inspiration from the over 20 years of collecting vintage toys, video games and sci fi/futuristic films. Given that light is Tremonto’s medium, it is the only alteration used to create these inspiring characters that are determined to light your fire for good. Each Lightbot is hand made by Tremonto in his New York studio and will be numbered, signed and will come in its own custom box. Those of you that cannot afford to pay a visit at Kidrobot store in New York can always enter at www.lightbotz.com to order your favorite one. Yatzer, of course, found Marcus Tremonto and had a small talk with him about, what else, toys and life!

Well, Marcus, could you cast a light on how did you decide to create Lightbotz?
I made the first one three years ago from a single drawing (Major U.N.T.) as just a personal thing, I thought of it more as a character than adding my identity to it…so I started drawing others over the years but never really making them, just kind of using it as meditational creativity in a way. 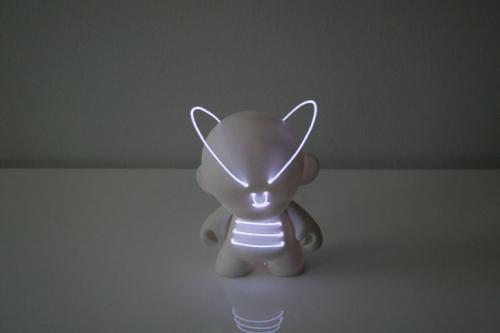 I think that it is quite obvious from the way you approached the whole project that this is the work of someone passionate about toys and not just an easy way to impress. What’s the secret yearn behind any collector? Do you think that the main link between creating and collecting is the desire to overcome mortality?
I think it’s interesting that you asked this question in this way, I think the mortality issue is there fundamentally, but for me it is more a refusal to abandon things that mean something to me, I don’t know why it is important for people to compartmentalize there life into periods or blocks of time, why abandon aspects of your childhood, your life is a structure in parts but all interconnected...I think the object is very powerful, it is a physical representation of an idea which is our unique fingerprint as humans to create for the purity of it.

What are the particular difficulties of using light as the main medium of your work? Would it be too crazy to think of you working most of the time in the dark?
The main difficulty is editing yourself in some way...because I use light that is medium based, not bulb based, there are no limits except the ability to undermine your efforts by not concentrating on what you are trying to express when you use it...its like painting, there are so many things to paint and create but there needs to be a concept because creation comes from a purposeless beginning…there is no function directly, just the image....

Which is the way that Lightbotz link back and relate to your previous work?
All of my work is using light to tell a story in some way, it’s always coming from some kind of reference point, either architectural based,
like the light paintings or the paper landscapes (which are representations of old digital landscape mapping), or using processes and art based concerns like figure ground or 2D representation( like in the Vakpak series or pixel bulb). Lightbotz are done in the same way, they are cartoon based but are also playing with humor.

Do you think that the D.I.Y. culture is one of the best demonstrations of individual inspiration? Could the customization of pop culture be an answer to the economic crisis?
I think the answer is that people have a way of correcting things over time...terms like artisan and renaissance man are now being re- defined and born through new technologies which allow a greater ability to self produced content of any nature be it music, literature art or whatever; there becomes no focus group, there is just focus and doing. 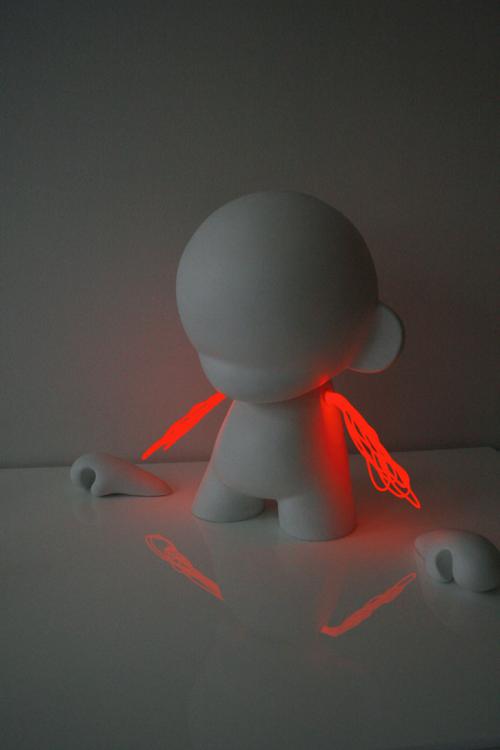 What are the reactions of the people so far to Lightbotz? Should we expect more to come from this collaboration between you and Kidrobot?
The response has been amazing and people seem to each have a different favorite which is cool to me. I have some ideas of things I would like to do with Kidrobot in the future that would be amazing to try but I think I am just happy that the project has come to fruition and people like them...to me it’s funny because it’s still something I make by hand, each and every one, yet they are their own in some way.